Leaders of Israel’s small, fragmented local authorities in the periphery, face a barrier in terms of their capacity to provide crucial services for their residents, in areas such as education, welfare, and employment. However, through cooperation between mayors, and the development of sustainable regional projects, the region’s resources can become assets for its development.

The Institute’s Center for Mayors and Regional Development works to create beneficial partnerships among mayors and senior municipal professionals, so that they can effectively collaborate with one another. These partnerships increase the capacity of local leaders to execute regional development projects, acquire increased budgets, and gain greater access to national resources.

The Center’s Regional Clusters Program connects municipal leaders to one another through voluntary associations of local municipalities, in order to collectively create long-term development strategies. In Northern Israel, the program forges cooperation through two clusters, Western Galilee and Eastern Galilee, by gathering local leaders and resources needed to enhance the quality of services in the region.

In the Eastern Galilee, the Cluster decided to focus on improving education in the region. A Steering Committee of mayors and professionals was formed, and three task forces were established, charged with promoting excellence in science, music and sports.

Science Task Force: is formulating a regional vision for science education, including a mapping of all the educational resources in the area. The task force has already developed an innovative program for teaching science, through the engagement of local industries. The task force also identified a key goal: establishing a network of three educational science centers in the region.

Music Task Force: developed a vision statement for excellence in music education, and is completing a work plan which will be implemented in the upcoming school year (starting September 2012). Part of the work plan includes the development of evaluation and measurement tools.

Sports Task Force: is developing a regional vision, mapping all sports facilities and programs in the region, and completing a work plan which will be implemented in the upcoming school year.

In addition, a Regional Forum for Directors of Municipal Departments of Education was established. This forum is developing collaborations in areas such as: joint purchasing in order to reduce prices, sharing facilities for programs for teachers and students, accessibility and sharing of information, and taking advantage of local resources. A plan with recommendations will be submitted to the steering committee.

The Clusters bring together mayors from diverse backgrounds: Jews, Arabs, religious and secular, representatives of large and small regional councils. All take part in building the foundations for the future of their region.

The success of the initial phase of the Regional Clusters Program has helped to create a model for effective regional cooperation across Israel. The Government of Israel (GOI) has seen the successes thus far and is interested in expanding the program. With the Institute’s assistance, the GOI recently published a Call for Applications, inviting mayors to join forces and together submit their candidacy to form Clusters. We were encouraged to see that 12 candidacies were submitted from across the country, involving over 80 mayors. This shows an important change – mayors are seeing the potential for collaboration.

The process of choosing the Clusters which will participate in the program is run by a steering committee, and based on criteria we have developed. The Clusters that will be selected will benefit from our professional support – designing the regional process, convening the partners, developing the mechanisms for cooperation, facilitating the workshops, providing ongoing support to the leaders involved, and overseeing the program to ensure its successful operation. The Clusters will receive government budgets for a Director-General and various development projects, and the Institute is assisting in developing policies aimed at maximizing these resources. The measurement and evaluation of the Clusters is being planned together with the Myers-JDC-Brookdale Institute.

The Cluster model was developed and piloted in 2009-2011, with the generous support of the Russell Berrie Foundation. We can now scale-up the project by creating a new partnership with the Government of Israel and additional funders who believe that large-scale changes in Israel can happen on the local and regional level, if they are led by mayors and local leaders, together with senior people from the central government, lay leaders and the business sector. These collaborative initiatives can succeed when we provide support in the designing of the process, combined with the right content and knowledge, and when they are directed to measurable goals and impact. The Regional Clusters Program has the potential to be a turning point for Israel’s municipalities, especially in the periphery.

An additional Regional program which we are leading is called Negev Circles. The Israel Defense Forces (IDF) is planning to move major army bases to the Negev, which offers an extraordinary opportunity to improve the quality of life for thousands of residents in the region. This unique project holds the potential to become a turning point for the southern Israeli periphery, affecting key areas such as employment, housing, education and transportation. However, this promising potential can easily be missed if the capacity of the local authorities is not strengthened so that they can participate in the planning of this complex process, and benefit from it.

The Center for Mayors and Regional Development is leading a collaborative effort, together with leaders from the local municipalities, the IDF, Regional Directors of government ministries, and the nonprofit and business sectors, designed to enhance cooperation and create long-term regional development strategies in the Negev.

As I shared with you in the past, we launched the program in February, with the Minister of Defense, Minister for the Development of the Negev and Galilee, 22 mayors, IDF generals, and leaders of the third sector. Since then, meetings were held with the partners to map urgent needs, identify specific areas to collaborate on, and learn from experts on relevant topics. During the last meeting, the forum chose to focus on two issues: economic development and improving the Negev’s image. Task Forces are now being formed to develop strategic plans in these areas, based on the participants’ knowledge and priorities, previous strategic plans that were prepared for the Negev, and the work of a strategic consultant.

The JDC Institute for Leadership and Governance is bringing together leaders from different sectors, in order to learn and make an impact. Click here to see a short video on the Center for Mayors and Regional Development, including footage from the launch of Negev Circles. 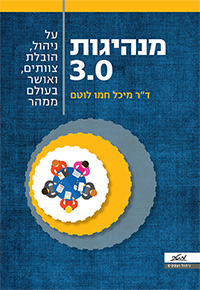